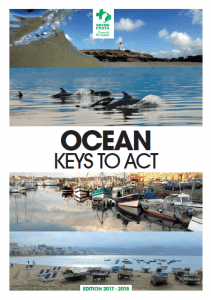 On June 8, 2017, Green Cross France and Territories (President: Jean-Michel Cousteau) will unveil, both in french and english, a booklet: OCEAN: keys to act.

This booklet will be the natural complement of the movie Wonders of the Sea 3D (les Merveilles de la Mer), a Jean-Michel Cousteau movie produced by François and Jean-Jacques Mantello, coproduced and narrated by Arnold Schwarzenegger, whilst launching in planed on second half of 2017 (with a premiere in Cannes on May 20th, hosting Arnold Schwarzenegger and Jean-Michel Cousteau) http://bit.ly/WOTS_2017.

The booklet is consolidating various insights and inputs on ocean and climate, including outcomes from the workshop « Climate: OCEAN objective » performed on April 13 at the European Space Agency in Paris: http://bit.ly/130417Merci

In order to get prepared for the World Ocean Day, we are launching a worldwide subscription for this booklet, via Green Cross France and Territories, as follows:

Hereafter is the order form (all major credit cards and paypal accepted).